Happy Solar Independence Day! If we had any sizeable solar power farms in the area you’d be able to visit them today as part of a national open day organised by the Solar Trade Association.

But Crystal Palace, like most of London, isn’t making the most of the sun while it shines. Residents spend about £15 million on electricity every year in Crystal Palace, not to mention all our local businesses. Bills are rising, making life tough for both, and this money is flowing down the hill into the pockets of shareholders for the Big Six energy companies. What if we generated more energy up on this hill and kept the money circulating in our economy?

Jenny Jones, one of our London Assembly Members and a Baroness in the House of Lords, published a great new report on solar power yesterday.

Just look at this chart, showing the amount of solar power capacity going up across the country since 2010:

London is that orange line right at the bottom. Yes, we have even less capacity than Scotland or the North East, hardly the sunniest climes!

But Jenny found that London has the capacity to supply one fifth of its electricity needs from solar power.

That would mean in Crystal Palace we could be generating £3 million in our local economy every year, not to mention cutting our carbon emissions by around one tonne (or 10%) for each home they’re installed on. Then we have schools, churches, shops and supermarkets, the train stations… what a bright future!

The Germans have been going great-guns for solar for years, and on a recent sunny day generated more than half – yes, half! – their electricity from solar power.

Thankfully we already have Palace Power looking for roofs to get a local energy co-op going. Here they are on a roof in Dulwich, sadly on a bit of a cloudy day… 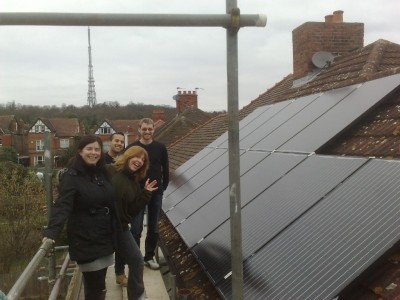 Jenny’s report suggests the Mayor, Boris Johnson, should set-up a kickstarter organisation to make their dream a reality. He could offer expert advice, broker deals on roofs and much more. If we had Green councillors in the area, we’d love to drive this forward in a similar way.

Anyway, enough of this.  Get out and enjoy the sun while it lasts, and spare a thought for the potential of all those roofs in the area!

Sorry, no Tweets were found.